Gifted, visionary, confidant, supporting, communicable, he gave an extremely essential and renewed dimension to the world master. He did not create a school. It was ideas and faith he infused to the young. He encouraged the development of their personality and, to the extend they were receptive, he helped them understand that art has a social purpose too. 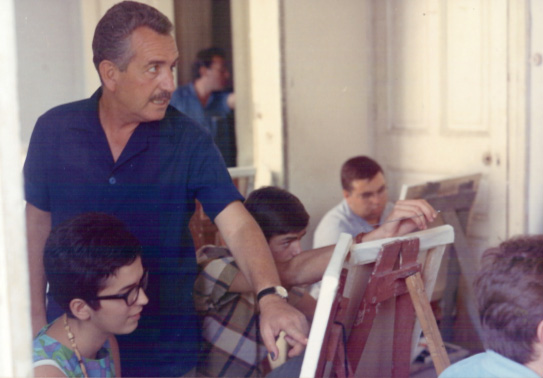 "In his teaching he would give his students enough leeway to branch out on their own and using their individual  sensibility as a guide develop their personal idiom. Far from seeking to keep them to the expressionism he himself had embraced -and this we have from those directly concerned- he tried to teach them how to best express themselves through colour and line. Thus his lesson in art was also one in freedom of expression, informed by candour and and immediacy" -Chryssanthos Christou

"Sarafianos was an ardent supporter of freedom. This extreme good he did not keep possessively only for himself and for his artistic expression; he ceded it with generosity to his students who were still in the preparatory stage for the School of Fine Arts; along with the composed transmission of his knowledge, he taught them at the tutorial of Ithakis' street the limitless possibilities of free thinking and of the alternatives. His influences as a teacher were hypodermic and charismatic. Towards the end of the sixties he visualized the Hill, a place of free and collective artistic creation within the fertilizing surroundings of nature, surely not intending to frame his undertaking with the climate of a charming novelty, singular and impressive at that time in Greece, but in order to demonstrate the social part, to promote a new modus vivendi of the artist with complete artistic autonomy, collective activities and communication" -Nelli Kyriazi

"In the case of Sarafianos, the act of teaching borders on the art happening-as-work. What goes on between teacher and students is no longer a one-way affair and becomes a co-operative interaction, the two having now gained within the framework of Hill an equal standing. What emerges is a new type of teacher. a type that not only goes against and alters the established notion of the relationship between teacher and student but lends a new content to the art of painting thanks to a new form: that of teaching as an art happening performed by co-creators, themselves in the process of being co-created" -Charalambos Daradimos