(from his recorded discussions) 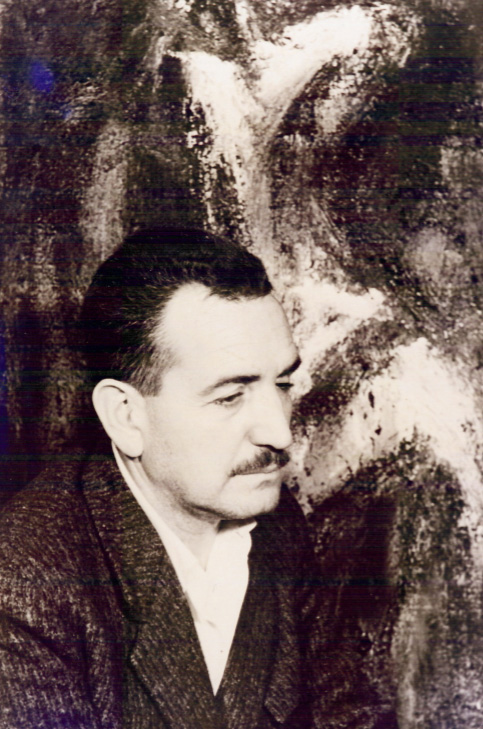 Panos Sarafianos was born in 1919 in Lamia where he lived his childhood years. He took his first steps in art in the workshop of his father, the painter Georgios Sarafianos. Alekos Kontopoulos was also apprenticed to the same workshopin earlier years.
In 1939 he entered the School of Fine Arts (ASKT). One year later, in 1940, he fought in the war and during the German occupation he took part in the National Resistance. In 1945 he graduated from the School of Fine Arts, having received many distinctions and praises.
Only two years after graduation he opened his renowned workshop which he kept until his death. A gifted visionary, a trusted confidant, inspiring and imparting, he ushered in a new ethos and dimension in the function of artist-teacher. He did'nt propose or impose his own artistic solutions, but encouraged and guided free expression by tracing, liberating and empowering the personality of young artists with whom he maintained lifelong relationships.
A painter of powerful talent and great potential, profound and direct, concerned with the substance of things, sensitive to social and aesthetic pursuits, his was a rare but not loud personality in the remit of visual arts. The stages of his personal expression in his youthful and mature years, from figurative painting and gradually into abstract gesture, are distinguished by originality, absolute character, penetration to the substance an overwhelming power. Fully conscious of the social and aesthetic questions of his time, he trusted in his own steps and found himself aligned with the international vanguard movements, having arrived there through parallel trajectories, both in his painting as well in the art movement-action, that he was preparing with an open group of young artists-students. He died at the age of 49 just as he was ready to realize his collective artistic vision.
Always devoted to the substance, he never sought public acclaim. As a result, his work and exemplary life enjoy respect among the knowing, but remain unknown to the wide public.